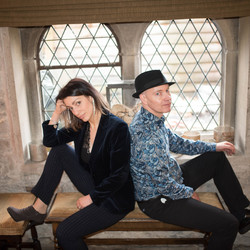 An enchanting addition to your wedding breakfast or cocktail party, LeLounge Acoustic Duo's chilled acoustic arrangements of popular songs ranging from swing, bossa, country and folk to indie, soul, motown, rock and contemporary hits will charm and entertain your guests.

Fantastic singer Laura effortlessly interacts with any audience combining perfectly with Dave's meticulous guitar arrangements and backing vocals. Their extensive repertoire allows them to adapt on the fly from subtle background music to audience participation sing alongs and dancing. Clients can even choose their favourite songs in advance from the repertoire or select a new song (e.g. first dance) for performance on the day at no extra charge.

Dave and Laura first began performing together in 2010 and now have hundreds of previous weddings, functions, birthdays, restaurants and bars experience.

No biography availableLaura-Jayne Hunter (Lead Vocals):
Laura-Jayne trained in voice and performing arts at Manchester's Capitol Theatre before fronting indie-pop outfit Mia and covers band The Sun Band. Over the last few years she has been inundated with demand for her solo act 'Indie Lounge', comprising alternative chilled down versions of popular songs of all genres and is lead vocalist with wedding and function band LeFunk! Her versatile vocals have led to many varied bookings throughout her career at venues including Peckforton Castle, Band on the Wall, the Free Trade Hall and Manchester's Comedy Store (as a singer, not comedian!), along with countless function rooms at hotels up and down the country. Laura is also a vocal coach.

Dave (Guitar/Backing Vocals):
Dave has been playing guitar since the 80s when he formed his first originals band as a teenager. He founded and performed with various function bands in Birmingham in the 80s onward, playing at major hotels and venues in the Midlands. He now performs in several formats, solo, with the function band LeFunk! and with the LeLounge Acoustic Duo. Dave is a versatile guitarist with a love of many genres. He has played in Jazz and Jazz Funk bands at Alexander’s Jazz Theatre, Cinnamon Club, Iguana Bar and various other Manchester venues, teaches guitar privately, and has the Grade 8 ABRSM classical guitar qualification.

Get in touch with LeLounge Acoustic Duo - North West UK