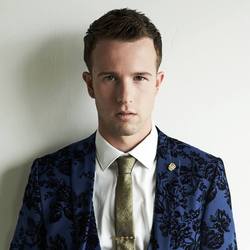 Sam Merrick is a British singer of ever growing repute. Having had the privilege of sharing the stage & performing with some of the top names in Jazz, he now performs across the the UK, pleasing audiences far and wide with the likes of The Nick Ross Orchestra, Ronnie Scott's Jazz Orchestra & other projects on the London & UK Circuits.

Sam Merrick is a British singer of ever growing repute. He has had the privilege of sharing the stage & performing with some of the top names in Jazz such as; Ian Shaw, Jacqui Dankworth, Claire Martin & Wynton Marsalis.
​
Upon completion of his studies at the Guildhall School of Music & Drama in 2014, Sam leapt straight into touring the UK extensively, as a soloist with the renowned ‘Nick Ross Orchestra’ which has lead to further appearances performing with the Ronnie Scott's Jazz Orchestra, Len Phillips Big Band and many other projects on the London and UK Jazz Circuits.

He lists Jazz, Soul and songwriters such as Jeff Buckley & Joni Mitchell amongst his many influences but his ambitions are clear. He wants to sing, make music and collaborate with others towards the same goal.

His performance and studio work to date is already extensive and diverse, from performances at the Swanage Jazz Festivals to the Royal Albert Hall. He has recorded music for American television and films such as NBC’s “The Sing Off, in addition to working under Oscar-winning directors including iconic British director, the late Ken Russell.

More recently in 2013, Sam became involved with the 'Backstep' Collective, featuring 8 of the finest vocal talents across London and World Renowned Guest Beatboxers such as ‘Bellatrix’, ‘MC Zani’ & rappers ‘MOWGLI’ and collective, ‘Strangelove’.

Sam is originally from the small but perfectly formed county of Dorset on England’s south coast, where the beaches are clean, the people are friendly and the summers are lazy and long.﻿

Get in touch with Sam Merrick