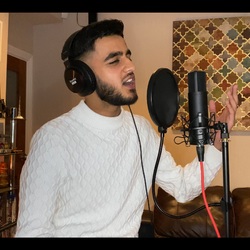 Overall Rating
5.00
1 review
Something wrong with this page?

Ismail Hussain is a UK based Islamic Faith Inspired Artist. He sings music in English, Urdu, Arabic and Punjabi.
Ismail Hussain performs with a band of musicians originating from various Eastern and Western backgrounds adding a diverse sound to his music.
He has performed in different parts of the world including South Africa, Kuwait, Pakistan, Portugal, Norway, Denmark and many other countries in Europe.

Ismail Hussain was born amidst the multicultural and vibrant Bradford into a family who have no long tradition of service in music nor scholarship. At the tender age of five years, Ismail started his journey in singing faith inspired poetry/songs in local mosques and religious events held by the community. It was a God gifted talent which he discovered within himself and began to pursue. His father became his biggest support, helping Ismail morally and socially through his first steps. Ismail took part in a national competition in faith inspired singing in which he was awarded first place. He seemed destined for a career in this genre as he received various experiences and training from such a young age. Ismail was the youngest candidate within the competition which became a great first achievement for him, to be recognized and appreciated across the world.

Over the years his vocal quality was being praised hugely and through this, he was able to travel across the UK and worldwide in places such as, Mauritius; South Africa; Pakistan; Kuwait and many others. He sat amongst leading Islamic singers in which he learnt to pick upon various methods and styles and how to sing in different languages varying from, Urdu; Punjabi; Farsi and Arabic. Growing up, Ismail continued to pursue and made great steps of improvement through many musical workshops and classical training.

Initially from the age of five until his mid-teens, Ismail Hussain began performing solo as an acapella act. As he continued to gain further experience and developed his skills, he started to become more musically-inclined having listened to artists of different genres from the subcontinent and Middle-East. Throughout his school life, he also faced great challenges with having to balance school and his social life along with his musical interests. Ismail successfully remained focused on his goals. His focus on his education and his subjects at school was always maintained and his school highly supported his passion. He was given suitable time off to travel for his events and his teachers encouraged him in becoming an inspiration for all. Ismail also undertook music lessons and with his fellow music students started to rehearse musical pieces. His curiosity and passion began to increase as he explored a diverse range of music all with the foundation of his faith. From here on, Ismail realised that he wanted to pursue music further as a career.
Although having been influenced by sounds and musical genres from the East, he felt there was a language barrier in the field of work that he was previously performing in. Using his English language skills and basic understanding of music at the time, he started to sing poetry in his native English to fall into the Eastern genre. Having an innovative and open mindset, Ismail set in motion the idea to merge Eastern sounds with Western. He became a great admirer of tradition and within this, certainly developed love for organic and authentic music which he continues to achieve.

Ismail released his first Urdu and Punjabi album in 2014/2015. This was a huge success as it was sold worldwide and his bilingualism became a great way to connect with his fan base across the worldwide South-Asian community. He continued to use his love and inspiration from his faith to support further releases in 2017 and his recent ‘Ya Rab’ (O Lord) in May 2019. Written by a Sufi poet in the Punjabi language, ‘Ya Rab’ became a very popular release which explores the concept of mysticism as the poet addresses his dependency upon his lord. Through his modern singing of the Sufi poetry, Ismail was successfully able to provide and instill this concept of devotion and dependency upon the younger generation.

Along with his Urdu/Punjabi works, Ismail Hussain began a new quest in utilizing his musical passion to deliver the message of Islam through his music. He has worked on various compositions, liaised with experienced and well-known individuals in the musical industry to work together on Project5. His most recent works, a compilation of five, faith inspired, collections of poetry (in English), written by N.B Sahibzadi and produced by MU-SYNC Arts, will be releasing in mid-January 2020. Ismail’s vision manifests in taking bookings for live concerts where he will sing with a full band of musicians to spread his love and passion for his faith and his music, reaching out to his worldwide audience. Despite hundreds of performances throughout the world, Ismail’s passion for singing acapella poetry and faith inspired nasheeds, in which he praises his God and the messenger of God, remains strong as ever as he strives even harder to make it widely accessible and appealing, to a wider audience in a variety of styles and genres. Through the dynamic rhythms of his music and his exploration of various melodies, Ismail aims to spread the positive and collective yearning for serenity and divine love.

Visit my website for more details on my work and achievements.www.ismail-hussain.com Report

Get in touch with Ismail Hussain - Faith Inspired Nasheed Singer