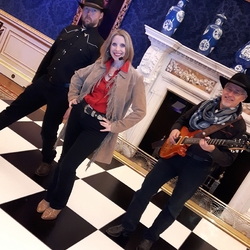 The sound of Anglo-Australian country artists - Dawn Moore and Brian Heywood - combines the storytelling of traditional country and the power of edgy roots rock instrumentation. The new single is a wry look at the way that all sorts of people are jumping on the country \'bandwagon\'!

It\'s been a busy year for Anglo-Australian duo Dawn Moore and Brian Heywood. After four single releases (including one that was in the Australia Country Music Tracks Top 40 for two weeks) and a successful collaboration with BBC Radio 1 John Peel\'s favourite Pyschobilly band \"The Pocket Gods\", Anglo/Australian country duo Heywood Moore released their first full length album at London\'s Alleycat Club. The album features members of their regular band along with guest players from the UK and Australia.

Anglo-Australian duo Dawn Moore and Brian Heywood are probably the busiest undiscovered country band in the UK with over sixty gigs last year, including four in Australia. Their sound is a tight amalgam of raunchy guitar driven roots music and rich vocal harmonies that bridges the gap between classic and new country. The band’s gig list includes festivals such as the Tamworth Country Music Festival which is amongst the world's top ten music festivals as well as being the second biggest Country Music Festival after Nashville. Back in the UK the band has played at many festivals as well as large charity events such as Coleen Nolan’s Wild West Party at Old Trafford Cricket Ground.


After four single releases and a successful collaboration with BBC Radio 1 John Peel’s favourite Pyschobilly band “The Pocket Gods”, the duo are released their first full length album at London’s Alleycat Club at the end of last year. The CD’s title is “Goodbye Yesterday” and features the members of the Hoedown Band along with guest players from the UK and Australia such as the BJ Cole (pedal steel guitar), Tom Kitching (fiddle), Guy Rogers (banjo) and Justin Saban (electric guitar) from the UK and Hugh MacDonald (acoustic and electric guitars) and Greg Hunt (fiddle) from Australia.


Brian has a formidable array of skills and experience. A guitarist, vocalist, bandleader, arranger, composer, producer and award winning song writer - he is just as at home on a big festival stage in outback Australia as in an indie live music club in the heart of London. Specialising in edgy roots music, his previous work has received comments such as "... aggressive, top notch fiddling set off by periodic guitar explosions" (Dirty Linen Magazine, USA), "Just when it seemed as if newer electric British roots bands were getting thinner on the ground … Very welcome and very good" (fROOTS Magazine, UK) and Steve Barnes Fairbridge Festival Artistic Director (Australia) - "... a rocking band … I was delighted with the audience response."


Dawn was bought up in West Midlands wearing a Stetson and a fringed buckskin jacket. As well as being a vocalist in a number of successful bands - Wizard’s Roy Wood complimented her singing and Ozzie Ozbourne’s brother played lead guitar in her first band - Dawn is also an accomplished actor and has many theatre credits to her name as well as appearing in film and on TV shows such as The Bill, The Legacy of Reginald Perrin, Brittas Empire, Crossing the Floor and many others.

The band normally tours as a five piece giving a rich intricate sonic texture of electric guitar and banjo / acoustic guitar along with a powerful rhythm section to back up the powerful vocals of the duo.

Get in touch with Heywood & Moore - New Classic Country